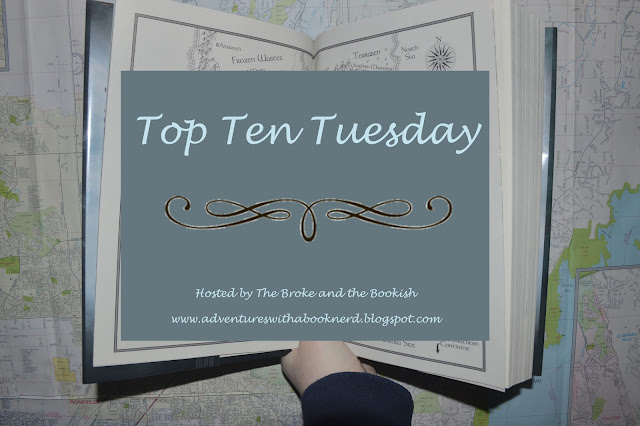 To find out more about Top Ten Tuesday and it's hosts, you can click here.

2.) I'll Give you the Sun by Jandy Nelson- This is another one that I pick up from booktube! Specifically polandbananasBOOKS, because I watched a video where she just raved and raved about this book, and I instantly bought it from Amazon.

3.) Everything, Everything by Nicola Yoon- This is one I found out about through Goodreads, and it is very highly rated! This was a fun book, and I'm glad that I read it!

4.) To All the Boys I've Loved Before by Jenny Han- This is another book that everybody was squealing about, and I just had to read it! I still need to read the second book, but then I'll be all caught up.

5.) Anna and the French Kiss by Stephanie Perkins- When I first started reading YA (reading in general) again, I watched a lot of booktube to see what was popular! This was one of the books that popped up. So, thank you booktube!

1.) City of Bones by Cassandra Clare- This was a must read for so many people, and it still is for a lot of them. So I obviously had to give it a try!

2.) Ruby Red by Kerstin Gier- This book wasn't as well known when I first found it, but I'm glad that I did! There were a couple of people that I found that were raving about this book, so it was naturally one of the first YA books that I read.

3.) Vampire Academy by Richelle Mead- I feel like this is one of those series where you have to at least try it. Everyone has read it, so naturally you feel the pressure to read it. So, I'm counting it!

4.) Throne of Glass by Sarah J. Maas- This was another book that was really hyped up, and that I read because of everyone pushing it into my face. I read the first book a couple months before the third book was released, and then I read the second. So, I've been following this series for the majority of it, and I'm proud to say that it's one of my favorites!

5.) The Selection by Kiera Cass- I didn't start off reading this series because a lot of people liked it, no, I started it because people hated it. I wanted to see what people disliked about it so much. I have read all the books except for the novellas and The Crown, so I should probably get to those soon.
Email Post
Labels: 2016 top ten tuesday weekly meme

Adventures with a Book Nerd

My Most Recent Posts: